My son, having grown up in the estate jewelry and firearms businesses, is now at 32 a very accomplished custom bench jeweler (The Jewelry Doctor) in Palm Beach Gardens FL. He’s had several semi-famous customers come to him in his unassuming but highly reviewed shop for difficult or intricate repairs (Miss Florida2016, Susan Lucci, Dr. Ben Carson, several well-known golfers) and crap-tons of loaded retirees tooling up in their Bentleys, Aston Martins, even a 70-year old hottie in her hubby’s new Lamborghini, many with rings or watches worth as much as a house, he schmoozes ’em, they love him, and they entrust their high-value heirloom pieces to him for repairs and restoration. But today…

Today a customer brought him a button. Not even a gold button. Just a stylized brass button that had its attaching loop broken off, because son uses a high-tech laser welder, mostly becauses it’s pinpoint fusion won’t transfer heat that can harm fragile gems, but also because unlike the traditional jewelers torch, it easily handles the properties of platinum, silver, and non-traditional metals…like brass.

And this particular brass button is pretty special, from the jacket presented by Ronald Reagan at his inauguration to Richard Feldman, a Reagan adviser and appointee to the Commerce Dept. and then later Executive Director of the American Shooting Sports Council, former National Rifle Association Regional Director, and author of the widely acclaimed book – Ricochet: Confessions of a Gun Lobbyist, and now President and CEO of the Independent Firearm Owners Association and legal advisor to Global Digital Solutions, heavily involved in the guidance of high-tech cyber arms manufacturing.

The button is embossed “Inauguration of President and Vice President Reagan and Bush.” Here's the text and picture that he sent me a few minutes ago to share with y’all. It doesn't have any real monetary value, but like I told him in reply, “It’s as precious a thing as you’ve ever had entrusted to your care in your shop.”

Like I said, very cool. I’m pretty proud of him, that such a figure would have been referred to him and personally bring such a treasured thing to him to repair, but even more so that he recognizes and appreciates the significance of what it represents, and spent time talking to and enjoying a conversation with Mr. Feldman 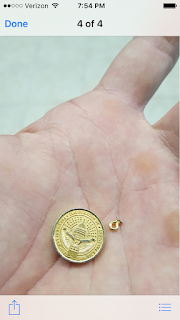 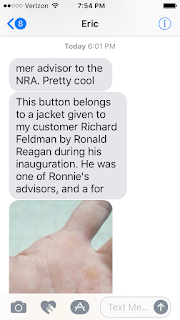 . At his age, that’s pretty rare I think, and perfectly in line with the understanding and sentiment of the text he sent me late on election night: “Wow, we might have just been given a new chance to help save America and the world.”
the pawnbroker at Friday, January 13, 2017