les paul died today. a guitar legend and father of the electric guitar -some would even argue the father of rock and roll- his name and his influence have been ubiquitous throughout my lifetime of interest in music.

him being 94, and his death coming as the 40th anniversary of woodstock has us in reflection mode, i'm feeling even older than usual today. beats the alternative, i guess.

you gotta give bobo credit: it's a pretty honest assessment of how efficient federally controlled healthcare would be.

i guess instead of a dead-letter file there'd be the dead-patient file. kind of problematic...you know, storage space, bad smell, etc. of course, this whole thing stinks to high heaven anyway.

still, it's a great (and accurate) analogy. i can see the advertising blitz now: "healthcare.gov...all the efficiency of the u.s. postal service with the customer service you've come to expect from amtrak..."

jtc
Posted by the pawnbroker at Wednesday, August 12, 2009 4 comments:

in his sad little attempt to play "hardball", this pathetic little fart sniffer actually provides a perfect foil for the new hampshire guy to make his case calmly and simply. matthews so desperately wanted this guy to be a foaming-at-the-mouth crazy that he decided to show him how it's done.

hi-f'n-larious. and a really great job by the interviewee in keeping his cool and stating his case.

them there new hampsterites are starting to look like my kind of yankees.

jtc
Posted by the pawnbroker at Tuesday, August 11, 2009 No comments:

irritated at a bumper sticker proclaiming "health care is a human right", the munchkin wrangler loosed a tirade that included that simple phrase...

while my son pointed out that it is a shameless riff off of the old black-on-black exclamation "nigga, please", i myself thought that in marko's context, never had so much been said with so few words.

so i and others badgered him to set up a cafe-press inventory of stickers and shirts to buy for ourselves. he did, and i did. and here are the results: 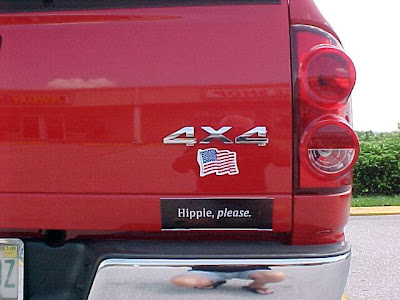 i thought it particularly appropriate for my hemi 4x4 truck... 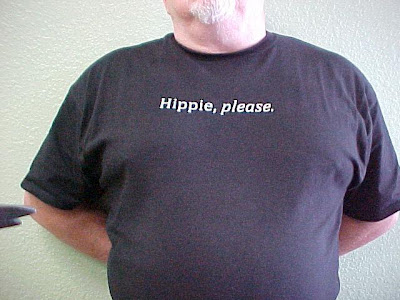 and even for my um...ample and obviously carniverous self.

jtc
Posted by the pawnbroker at Tuesday, August 04, 2009 No comments:

seems an odd rule for a place where shooting is the point. but discussion at tam's centered around exactly that rule at the range she frequents. there they require bringing in unloaded/cleared firearms only...necessitating what she and shootin' buddy point out is the distinctly dangerous practice of unloading range guns as well as carry-ons in the car or parking lot, etc.

but as i said in comments there, that same logic holds for any place with such a rule. and there are many, sadly including even most gun shops, which often feature a big sign on the door; "no loaded firearms". that made a bit more sense in the days before carry permits and most guns coming in the door were for sale, trade, repair, etc...but now, with perhaps a majority of those who frequent ffl's carrying concealed, it has become an absurdity...and a decidedly dangerous rule. combined with the many places -public and private- that ban loaded firearms on the premises, it brings into focus just how often the need for permit holders to unload -or offload- their weapon in the car before they can enter these premises unnecessarily endangers everyone in the vicinity, as manipulating mags, slides, and cylinders requires much touching. and though some anti's would have you believe the very presence of guns can cause random carnage even when they're safely in their holsters, it's all that touching that can result in an n.d.

it's a big problem that many don't really think about, and there's not an easy solution...maybe the best one is to just avoid such places whenever possible.