via instapundit...is it copyright infringement? marketing savvy? or just coincidence?

well, my money is on the marketing; but who's really copying who? the boys at pepsi are no doubt trying to hook their wagon to the new superstar...for one thing, there's a big new chicago headquarters and it stands to reason they would try to make the tie-in to the hometown boy. but pepsi's slogans have for decades tried to appeal to the new, young generation. and the old pepsi logo looks eerily similar and could just as well have inspired the hopeychangey "o". well, regardless of who's ripping off who...it's one more reason for me to dislike that syrupy-sweet, flat-tasting imitation coca cola.

because it wouldn't be the first time that pepsi embraced exclusionary elitism to promote their brand. years ago i read the story of the corporate recruiters who come to college campuses to try to attract fresh meat into the company fold. and one of the main selling points of the pepsi people was to disparage coca cola as being old and stupid and slow...because you know, they're (shudder) a southern company based in atlanta. now pepsi on the other hand, they said, is based in hip and cosmopolitan new york...way cooler, way smarter, and so much more with it than those clingy, ignernt, porch-sittin' southern folk.

yeah, it does sound familiar...and looks familiar too. fuck pepsi, and the "o", and the logo they rode in on. i'm gonna go get me a coke.

jtc
Posted by the pawnbroker at Wednesday, December 31, 2008 No comments:

the munchkin wrangler references (and soundly disputes) a "study" that concludes: “sexual content on tv is linked to teen pregnancy rates”. well, me being me, i started to offer a comment of agreeance...then i sorta went all tangential...


well, i can put the lie to that little study with my own personal little anecdotal history. there surely wasn’t any “sexual content” on tv in my little town in the 60’s and 70’s; we got snowy reception of abc and nbc only, and cable was just a rumor when my sweetie and i were missing the onscreen “features” in lieu of our own at the local drive-in…backseat rendezvous which eventually and predictably resulted in my daughter’s debut when we were both just 17.

hard to put the blame on something that didn’t exist, and we weren’t the only ones…several of our classmates made babies that year and the next, though we might be the only ones still together after 37 years; it’s not an easy or advisable path, that’s for sure. but it wasn't hbo, and it wasn’t ignorance either; this was the height of the counterculture age of “making love not war” which resulted in some fairly blunt and practical sex-ed courses in school, and most of us had pretty straight talk from the parental units at home on the possibilities and consequences. still, it was before aids had reared its ugly head and condoms were used not as much for std prevention as for their decidedly imperfect role of baby prevention, and there were those- ahem- whose preference for bareback sometimes outweighed the potential for parenthood in the heat of the moment, but who decided to accept responsibility and embrace the role of parent once it was, uh, thrust upon us.

but none of this is to say that popular entertainment for our young is anything to champion…the internet, videos, movies, “music”, and yes, television to which our young are exposed and addicted, has absolutely had its negative effects on their concept of what is good and decent and worthy as related to attitudes and actions towards others and even themselves; nudity and sex and love have been degraded and defiled and dulled to the point of eclipsing the beauty, tenderness, sacredness...and personal responsibility...that human relations are based on.

censorship at the hands of parents is an excellent tool; we limit the choices of those who are not yet mature enough to make wise decisions…but in the hands of gov, censorship and restriction of anything; entertainment, drugs, guns, and any other victimless pursuit or pleasure, is fallacy…even counterproductive as evidenced by the reduction in unwanted pregnancies, addictions, and other aberrant behaviors in societies which leave such choices up to adult individuals. that is one of the strongest arguments for "little l” libertarianism, and one which has been and probably will continue to be ignored as peripheral or antithetical to common thought and more importantly to those who would wield it, political control.

jtc
Posted by the pawnbroker at Sunday, December 28, 2008 No comments:

merry Christmas to all...

nothin' but the truth...

jtc
Posted by the pawnbroker at Sunday, December 21, 2008 No comments:

thirty seven years...where did they go?

as i mentioned in the biff burger reminisce in my last post, today marks thirty seven years since my terrified little 17 year old ass joined together under the watchful eyes of God with the most awesome 5 foot nothing package of georgia dynamite He ever created. the baptist church where we sometimes went just to have an excuse for a sunday morning date was right next door to the old-line hardware store where i pulled down the huge sum of two bucks an hour for the first year we were married...and the other guys and gals at the store abandoned their posts for a few minutes when we came out of the church to shower us with rice. then it was off to the holiday inn for a one-night honeymoon, and back to our tiny one bedroom upstairs apartment which we had decorated for Christmas with lights on the wall in the shape of a tree. happy but scary times, with a baby girl on the way and a '61 vw bug that my pregnant girl had to help me push-start so we could go to the baby doctor...but i'd go back and do it all again without a second's hesitation.

how in the world could she be the same age as me, have the capacity for hard work beyond someone twice her size (me), a dedication and devotion to her children and grandchildren that amazes me every day, plus put up with my crap all these years and still look twenty years younger? i am one lucky s.o.b., and i thank my lucky stars for her every day.

jtc
Posted by the pawnbroker at Thursday, December 18, 2008 No comments:

came across a story on the old biff burger chain today, and it brought memories flooding back... 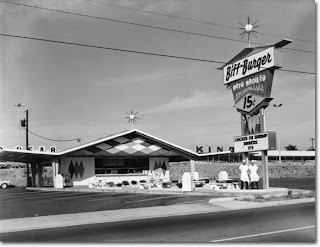 friday night was date night in our little town of pahokee, fl on the shore of lake okeechobee...my girl and i were 16 and would go to the local drive-in theater in nearby belle glade (think burt reynolds as gator mccluskey, though i'm afraid we didn't see much of the movies ;), then it was back to pahokee to hit the biff burger for a shake and a sack of fries to munch on as we joined the cruise circuit convoy through downtown, up to the levee overlooking the lake, and back again in a continuous meandering circle in my mom's nearly-new 1969 plymouth fury III...

that was 1970, and with a baby on the way we were married the following year at age 17 (like i said we didn't see much of the movies), had two girls by age 20 and a boy ten years later...next week on december 18th we will celebrate our 37th anniversary, have four grandkids and a good life in sebring, fl only about sixty miles from pahokee, and a mountain place in north georgia.

pahokee is (was) an agricultural town in western palm beach county; the sugar cane business is dying off, and along with it pahokee and belle glade; the biff burger closed along with most other businesses in pahokee long ago, and though the belle glade location lasted longer, it too is now history...and what a history it is to us...the glades drive-in theater and the biff burger are some of our brightest and fondest memories; we will never forget them.

little did we know that we on those date nights were some of the last that would enjoy the pleasures and freedoms of two of this nation's most melancholy memories and cherished institutions...drive in movies and burger joints. i'm sorry they're not around for our kids and grandkids to enjoy...and remember.

jtc
Posted by the pawnbroker at Saturday, December 13, 2008 3 comments:

well it's back to work, for a while at least, as my son and i enact step three of my little obama recovery plan (see previous post).

doing the blog thing (a little posting of my own, but mostly cruising and commenting at others' places that i like) eats up time that i need to put to more productive, if not more enjoyable and educational, use. i have to say that i have been amazed at the knowledgeable, intelligent, creative, and often hilarious discourse at the blogsites i have frequented the last several months; thanks for that.

so ya'll play nice, and as frosty said as he melted away, "i'll be back again someday.."

jtc
Posted by the pawnbroker at Thursday, December 04, 2008 3 comments: