it was predictable that with the teevee industry making almost nothing new except "reality" shows, there would eventually be one featuring pawnbrokers; anything that is not widely understood or perceived to be somehow odd or illicit is bound to be a target, so i've been expecting it.

i've seen a couple of episodes now (twice they've run back-to-back episodes, apparently trying to give the show a shove out of the gate), and it's pretty bad...but not as bad as it could be. 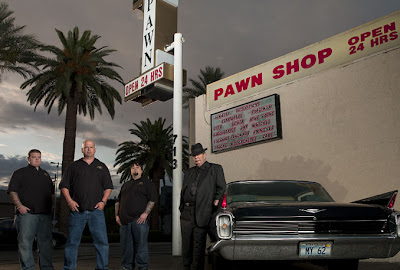 you've got your standard cast of characters/caricatures; the crusty ol' grandpa who founded the business, his middle-aged son who is the main man now, and the son's son, a 300-lb smart-mouth who just wants to get rid of dad and granddad so he can take over and call all the shots. add a 400-lb doofus as the designated clown and a seemingly endless supply of "experts" who are apparently at the beck and call of the central characters, anxious to drop everything to run over to the shop to do appraisals and provide historical data in their specialized fields, and you've got the pawn shop version of "dog the bounty hunter", "operation repo", "deadliest catch", et al.

set in vegas, you expect a different clientele than main street, usa...but damn. it strains credulity (as if reality shows had any) to watch the steady stream of off-the-wall and high-dollar items walking in; an 18th c. hotchkiss wheeled cannon which they drag out into the desert and test fire and subsequently pay 30K for, a civil war officer's sword, a five hundred year old jousting helmet, a 20K chris craft speedboat, a big dog chopper, several scarce antique firearms, a couple of rolex watches, a '54 gretsch, a huge commercial woodworking machine (which required a forklift, a flatbed, and a crew of four to pick up for pawn), even a couple of salvador dali's...all in the first couple of episodes? and the customers are all apparently collectors, businessmen, etc.; where the hell are the housewives pawning their wedding rings to make the rent, the out-of-town gambler who spent it all and pawns his bracelet and laptop for airfare home, not to mention the paycheck to paycheck types bringing in the same flatscreen every month for a couple hundred to get by, and the steady stream of lowtones dragging in useless junk they "found"? and what about the goofballs who come in muzzle-sweeping everybody in the place with the hunting rifle they want to borrow on, and the obligatory druggie/drunk you have to (sometimes forcibly) remove from the premises? shit, if his client list was representative of "reality", maybe i wouldn't have burned out and turned out.

still, the main character has a decent way about him, and at least on camera seems pretty honest and open; most media pawnshop depictions have featured monosyllabic cretins with dirty hands and a dirtier demeanor, so as i say, it could be worse. no doubt most of the stuff is scripted, but if his daily fare is the multi-thousand $ items that are featured on the show, this is one unique pawn shop. and i'm gonna have to get ahold of his rolodex of experts who are so anxious to help him make a deal without trying to scarf the deals for themselves...

so even though this show and others like it should be called "unreality" shows, i'll probably keep watching just because it's one of the rare non-negative portrayals i've seen, and some of the stuff that makes it on camera is pretty cool.

Seth from Massachusetts said...
This comment has been removed by a blog administrator.
August 13, 2009 at 3:22 PM

A most interesting part of the show is the quick and successful negotiations performed by the owner and/or his son to knock down the price of an acquisition.

They know the person coming to sell or pawn needs the money quickly, and take full advantage of that need to pay bottom dollar (most of the time) for their purchases.

A good lesson to learn.

If you want gritty realism and poor people pawning their jewelry to make their rent, I recommend "Hardcore Pawn" which is set in Detroit and has no charming characters in its cast of not-nice-at-all employees. And the security guards get frequent walk-on roles, too!