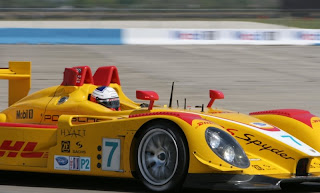 after eight consecutive overall wins at the 12 hours of sebring, audi falls to not only a porsche, but a porsche in the next lower class from the state-of-the-art diesel-fired audi entrants...in a race where speed is secondary to durability, the tdi audi's and the upstart diesel peugeot just couldn't avoid enough of the crashes and mechanical failures to endure the punishing track and 12 hour duration of the american lemans first race of the season and precursor to the 24 hours of lemans.

and roger penske, the icon of auto racing whose team also won the daytona 500 in this year's first and all-important nascar race, sees his team improbably leap past the top category cars to win not just class but overall honors at sebring in the same year that he was inducted into the 12 hours of sebring hall of fame.

that same induction ceremony also honored audi, the first time a nameplate has garnered that prize; alas, it was apparently a jinx, as the two audi entrants which have finished first and second several times in their eight year championship reign, failed ignobly and are beaten back by the lesser p2 class porsche, and perhaps the most winning brand in endurance racing history regains it premier position...at least for now.

congratulations to porsche, the winning team of drivers, and most of all to roger penske himself, who has endured failure and tragedy but persevered to attain the pinnacle level of success and recognition in all of his racing endeavors.
Posted by the pawnbroker at Sunday, March 16, 2008