time for the 12 hrs of sebring party...i mean race! 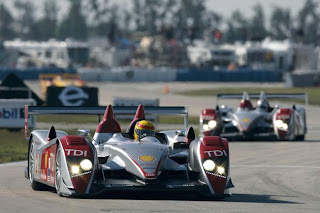 well, it's that time again...every march since the 1950's, sleepy little sebring, fl comes alive for a week..."race week".

now i'm sure at one time (but not in the 25 years i've been here) the real focus was on the latest, greatest, fastest cars in the world attempting to stay in one piece for 12 straight hours (originally it was 24 hours, ala lemans) as they blasted around the roughasacob multimile course that was once a wwll pilot training base...it was known too, as a place where adventurous celebrities could pretend to be race car drivers, and some of them were pretty good, notably steve mcqueen and paul newman.

but not anymore...sebring has for years now been known more for it's outofcontrol weeklong campout-barbecue-drunkenbum-showusyourtits party than for anything to do with auto racing. you really can't see much of the race from any one particular spot along the course, but those who arrive early enough (and i'm talking lining up their rv's and party buses weeks! before the gate opens) can stake out a spot at a particular turn or straightaway that allows at least some view...but the real action and attraction for most of these folks, many of whom come back year after year, is the "greenpark" area where rows of campers sit around all day drinkin', smokin', gettin' rowdy, and otherwise havin' fun.

or they drive around the access roads in a constant snailspace parade of pickups loaded with revelers or homemade party barges complete with graffiti, platforms, and uh...ladies more than happy to oblige titmen...now the sheriff's office does keep some measure of control in case of fights, too-blatant potsmoking, and so on, in order to maintain what is euphemistically called family-friendly atmosphere...but they don't want to be too strict because there's quite a bit of cash being spent, and hey, the cops (most of them anyway), are guys too.

so, if this sounds like a great week's vacation to you, come on down! but if you really care about watching the latest grand prix and prototype race cars go at it, then you're probably better off watching on espn...at one time great old nameplates like ferrari, jaguar, and porsche actually raced semi-stock versions of thier high-priced offerings, but these days the top classes are dominated by custom-built bazillion dollar factory sponsored cars and teams...the last several races have been won by audi and their diesel-fired laboratory on wheels...but there are still a lot of entrants in the lower classes running porsches, corvettes, vipers, and the like.

to me the best part of race week was always the off-track activity...the track itself, like i said, is the old military base that is now what passes for an airport in our little burg, and it's located about six miles outside town...my pawn shop was for fifteen years located at the intersection of the main road into town and the airport access road, so i had a great view of all the cool custom carhaulers, and lots of spectators who drive their own stock version of the ferraris, etc. who often gassed up at the texaco located in the same building as my shop...what the hell kind of job or profession do these guys have that they can cruise into town in their 200k toys to watch this race? yeah, i know, that ol' green monster that lurks inside all of us is showing it envious head.

but by far the best part for me, for all the 15 years my store was in that location, was the vintage racecar "technical inspection", whereby forty or fifty fifties and sixties versions of some of the coolest cars ever made in the world would, some worth upwards of a million bucks, and with full police lights and sirens escorts, blast down airport road (at a pretty good clip mind you) right past my shop and into the downtown area, then a few hours later blast back past and back out to the track...that was truly a spectacle to behold, and i'm glad i got to see it.
Posted by the pawnbroker at Monday, March 10, 2008