had to make a quick trip up to the georgia mountain place saturday, and it was the first real shakedown run for the new truck. 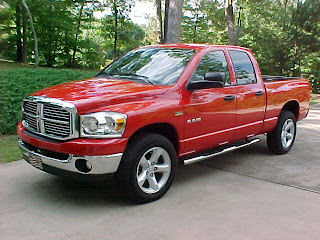 contrarian that i am, when nobody else is buying, that's when i get interested...because anything that's not a perceived gas-sipper (like suv's, trucks, and anything with a v-8 that they were clamoring for a year ago) are now seriously discounted by the factories and dealers that have a ton of them in the pipeline...they've got to move that inventory to cut costs and raise cash to keep heads above water, and there's a real chance that at least one of the domestics won't make it...

that has resulted in $10k and more off of msrp for all of the fullsize trucks, even toyota and nissan. and then dodge got real serious...40% off sticker for all ram 150's. i had been thinking of swapping my little explorer sport-trac which was four years old with an expired warranty and in need of tires, brakes, belts, radiator flush, etc...about a grand worth of work. i had been wanting something with four doors, 4x4 for 'splorin the ga. woods, and i wanted a heavy duty tow package to pull large trailers full of crap from place to place. 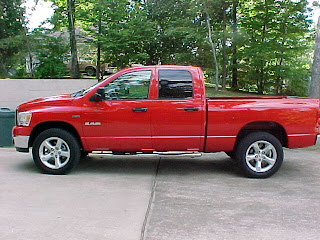 so when my son and i checked out the local dealer to be sure the deal was for real and not padded with dealer add-ons, etc., he was drawn to a red quad-cab hemi that was pretty loaded and had a factory sticker of 39k and the only dealer adds were a bedliner and step bars (which i would need anyway for my barely 5' sweetie) which totalled the retail at exactly 40k...would they really take off 16k and sell this truck at 24,000? they did, plus took the sport-trac in trade at 10 (i paid 16,5 for it new), and added only ttt (no "dealer fees"). 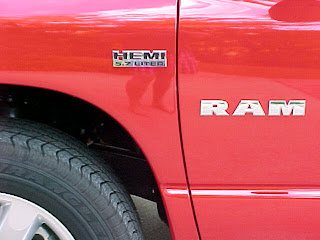 so, out the door at 16; pretty hard to beat even for a gas hog...but is it really such a hog? the 6 cyl. ford got real-world 14-15 mpg locally, and 20 on open highway...in the first two weeks around town the hemi 4x4 got 11-12, which included pulling my 16' box trailer some of the time and keeping my foot into the throttle a good bit to hear and feel that rumble...then this road trip of a little under 600 miles returned exactly 16mpg; not econo by any means, but not bad at all especially considering that i had cruise set at 75 most of the way on the fla turnpike and i-75.

okay, a little 'rithmetic's in order; the new truck gets 4 mpg less than the old truck and figuring 12k miles per year and four bucks a gallon for gas, it'll take more than 16 years to use up that 10k extra discount...and that doesn't take into account the grand that i was about to have to put into the ford, a fresh bumper to bumper warranty on the dodge, or the fact that the new truck will do a lot more of what i need/want to do...the stampede to econoboxes just doesn't make economic sense. 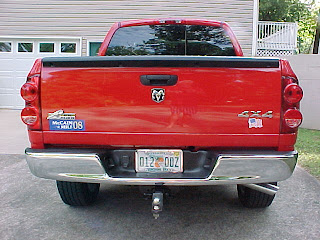 and yeah, that's my son's mccain/milf '08 sticker on the left rear; it's days are numbered though...wifey says it's disrespectful and she has a point, plus not very becoming with an old gray-hair at the wheel (still like it though; palin probably would too).

jtc
Posted by the pawnbroker at Monday, September 15, 2008

Taking the bumper sticker off will deter liberals from keying your paint job, too, if you aren't careful about keeping an eye on your vehicle.

yeah, it thought of that, bob...but if my eye caught some m'er f'er doing that shit, i would feel the need to "deter" them in a different manner.

but actually i plan to cover the mccain/milf with a maverick/cougar...i figure anybody ignorant and sorry enough to be an o disciple and a filthy vandal won't know what the fuck it means...jtc